Client projects are often times mundane, not well executed, or a collaborative mess between the various agencies (photography, videography, styling et cetera) handling it. However, there are times when a client project, especially for branding, can take a wild turn for the better.

When such an idea is thought out, it has to bear the might of reality checks, much like a small boat in a violent ocean trying to reach its destination. More often than not, ideas which are thought out don’t make it to a great execution. But sometimes it can out do reality checks and turn out to be a unique design.

Such is the case of Exotic Alley and using marble painting to provide an essential element to its brand. Exotic Alley is a client that arranges bespoke luxury getaways for its patrons. Its founder, Nihit Goyal is an avid traveller and has tons of travel experience as well as an in depth knowledge of travel hacks for cheaper tickets, unknown excursions, and a variety of travel locations. Branding Exotic Alley required a solid concept base but with fluctuating design, to encompass the difference of each individual’s travel requirement.

Exotic Alley’s Visual Identity aimed to provide corridor to what the brand means to deliver. It needs to be relaxing yet enthusiastic, impactful yet serene. Keeping the brand’s ideology in mind, paper marbling technique was opted to create the visual imagery for the brand. Paper marbling is a method of aqueous surface design, which can produce patterns similar to smooth marble or other kinds of stone. Marble Painting proved to be an apt concept for this branding project as each individual design is different from the other, whilst stemming from the same concept. Colours blue and gold were used to give a calm, ocean-y, luxurious feel, resembling the exoticness of each travel destination.

Our Profiler and Designers took up the entire floor of a room, and spent hours making various marble paint patterns on different papers. The final tally was a staggering 193 separate patterns. Then began the short listing and post production processes which took up another day and a half. All of this hustle was worth the final product as we thought the design to be incredible, and more importantly, so did the client.

These patterns went on to form the base for Exotic Alley’s branding and are now all over its website and stationary. A job well done, I would say.

Pray For Me by The Weekend, Kendrick Lamar

Loner Anthem by Josh A 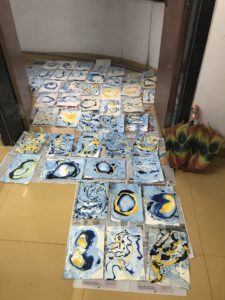 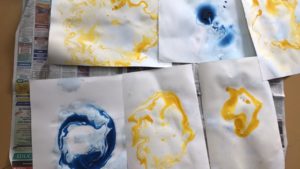